Today, Debra Andrew’s life is filled with love, happiness and success but it wasn’t always that way. The daughter of a teenage mom, Debra felt lost in her early years and used defiance as a way of coping with the chaos surrounding her. She grew up in an area of Calgary, Alberta, she calls the “hood,” where drugs and alcohol abuse were simply a part of life. Surrounded by mental health and addictions issues, she received minimal guidance and support. She “barely” graduated from a high school where a very small percentage of the graduates continued on to post-secondary.

Her boyfriend at the time seemed her only beacon of light, and promised a world of new possibilities and better outcomes. They had their first child when Debra was 19 and married soon after. They embarked on a new life together, hoping it would be a better one. But things didn’t work out that way. Her new home was exactly like the one she grew up in and over time she realized that if she stayed, she would be repeating the dysfunction of her youth. Debra loves her family dearly but the thought of her children going through what she went through as a child terrified her. Once she recognized the repeating pattern, she decided to break the cycle.

LIFE AS A SINGLE MOTHER 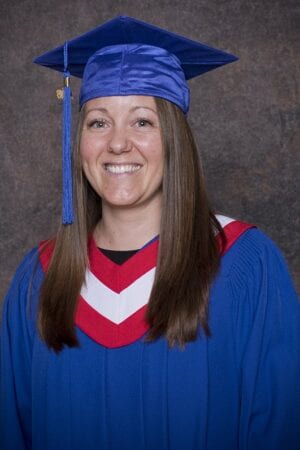 Although she knew she had to walk away, it’s difficult to leave your partner of nine years. The weight of being a single mom and raising two children on her own pushed her into depression and anxiety for over a year. “It was hard,” she recalled. “When you get up in the morning and you don’t have the energy to get out of bed or you’re scared to go to sleep at night because you just don’t know what’s going to happen. You sleep with all the lights on.” Her voice shook as she continued, “Then, in the back of your head, you know you have to get up the next morning to pay bills and look after your kids. It’s really hard for people who struggle with anxiety and depression to be motivated to get it done but in the end, that’s what it comes down to. Either you let it overcome you or you power through and you ask for help.”

The emotional stress was only a part of the struggles Debra had to face. When she left her husband, she lost the sole breadwinner of her family. After their separation, she landed her first full-time job as a receptionist but it did not pay enough to cover the bills. “I put the kids in daycare but I couldn’t get any child support or any help from my ex-husband, so I ended up having to work two jobs.” She also worked as a bartender at the airport two nights every week just so she could afford groceries for her family.

This was a difficult phase in her life but it was also the catalyst for the strong bond she shares with her children today. “We’re still very close,” she said proudly. “We still rely on each other and know we can depend on each other.” Even with two jobs, Debra made time for the important things like taking her daughter to soccer practices. She would finish work at 4:30 p.m., drive for an hour to pick up her daughter from home, drive for another hour to take her to practice, watch practice until it ended and drive home. She did this two times every week and never thought twice about it. “My kids are my life,” she stated emphatically.

STARTING OVER IN NELSON

Debra Andrew now lives happily in Nelson, British Columbia, with her second husband and two kids. Together, they have worked hard to build a life they both enjoy. In the past six years that they’ve lived in the Kootenays, Debra and her husband took turns going back to school to find new careers.“It’s like a make it or break it town,” Debra said. “There’s not a lot of work. I was fortunate to get on with one of the bigger companies because of my experience but my husband had a really hard time finding work in his field.”

“It was hard,” she recalled. Debra’s husband, who is now a paramedic, stumbled upon an ad for Stenberg College’s Regional Diploma in Psychiatric Nursing and called her. After everything she went through in her childhood, he understood why it was important for her to have a career where she could help people every day. “He was so excited that this program existed because he knew how much I wanted to get into mental health and addictions,” Debra remembered. However, she didn’t share his enthusiasm at the time. “I thought, ‘It’s so expensive and there’s so much time. How am I going to get off work, and how are we going to afford our bills? Who’s going to take care of the kids?’”

GOING BACK TO SCHOOL

Now a proud Stenberg graduate and Psychiatric Nurse, Debra laughs at her hesitations. “It all just fell together. My loans came in and my boss was so incredible. He was supportive of me working only three days a week and whatever else I needed. Everything worked out.” By now you have probably picked up on the theme of Debra’s life: perseverance. Even though she and her family decided Debra would go back to school full-time, she was yet to be accepted into the college. Part of the application process involved sending in her high school transcripts and upgrading any necessary pre-requisites. Given her history as a “defiant” student in high school, Debra had to upgrade her math and biology pre-requisites but took a challenge exam for English. “My high school transcript had a 50 percent with a little asterisk, which said ‘With special consideration,’” she laughed embarrassingly. Reviewing her high school grades almost 20 years later was an eye-opening experience for her, but also pushed her to work as hard as she did in the program.

Her practicum for the program was in Kamloops, which is about a six-hour drive or approximately 460 kilometres from Nelson. “I was working three days a week and then I would get off on Wednesday and drive to Kamloops for two days of practicum. Then I would drive back to Nelson and do two days of school online and then go back to work on Monday.”

This meant Debra was on the road to Kamloops and back twice a week for her practicums, which is at least 24 hours or 1,840 kilometres of driving every week. During this time, instead of listening to the radio or her favourite music, she would listen to study notes and textbooks that she had recorded in her own voice ahead of time. Debra said, “It really challenged me to a whole new level that I didn’t even know I had inside me. They say going back to school is like learning how to ride a bike again. I felt like the last bike I rode still had training wheels on it. It was a huge learning curve for me.”

It was a learning curve that almost cost her her future career in nursing. In her first week in the program, Debra dropped out. The commitment was too huge and she felt she didn’t have any time left for her family whatsoever. She called Stenberg and cried, “I can’t do this!” The next day, when she gathered her nerves and realized she had made a mistake, she called the college back. “I need to do this,” she said. “I want to do this.” This was a turning point in her journey at Stenberg. After this, she worked harder than she had ever worked before. Getting good grades on her exams boosted her self-esteem and motivated.

As a result of her hard work, Debra Andrew graduated from Stenberg’s Psychiatric Nursing program with a grade point average of 94 percent and as the 2017/2018 Student of the Year. Several of her instructors and clinical preceptors nominated Debra and raved about her dedication to learning and helping others in class and at practicums. “I believe that Debra has worked above and beyond not only with her school work but also on her practicum placements. I have heard nothing but positive comments and watched her work first hand with mental health clients, and patients in hospital settings. Debra has displayed unconditional acceptance and is client-centred,” said Joanne Fraser, Debra’s Practicum Instructor. Debra has certainly come a long way from the student who graduated high school with 50% to Stenberg College 2018 Student of the Year Winner, achieving a remarkable GPA of 94 percent. Her success is clearly the result of her work ethic and dedication but she credits her family. “Without my family, I don’t think I would’ve made it through the program. I met fantastic people in my cohort who let me stay in their homes the entire time I was in Kamloops so I didn’t have to pay for accommodations. I couldn’t have done it without them for sure.” Debra continued, “We were a really strong cohort that helped each other. We really leaned on each other for support.” By the time they graduated, her cohort had fostered strong friendships and they still meet for dinner every now and then.

While gaining a new career at Stenberg, Debra also went through a personal transformation. “It definitely made me more compassionate and empathetic to people and their stories. My own story is complicated and I’ve always had a place in my heart for people and their stories,” she said. “My eyes are open now, and I think that through this program, I’ve definitely lost a lot of that ignorance towards people around me.”

Debra was hired as an interim nurse at Kootenay Boundary Regional Hospital in Trail, BC immediately after practicum completion. She took the National Registered Psychiatric Nurses of Canada Examination (RPNCE) in May 2018. “I passed my exam, which was such a relief! It took me 20 minutes to open up the e-mail because I was so nervous,” she laughed.

Debra is 39 years old now and a Registered Psychiatric Nurse. In the process of achieving her dreams, Debra did something wonderful. By refusing to let hurdles hold her back, she became a strong role model for her children, inspiring them to work hard and chase their own dreams. Her husband, Jason, said, “Debra is the definition of ‘Role Model’. While she was in the program, never once did a single personal relationship struggle, never once did the kids see anything other than hard work, perseverance and the joy of accomplishment.” Her elder daughter, an accomplished soccer player, started university this year and Debra could not be prouder. Her hard work has paid off, for her and her family.

For futher information on Stenberg College’s Psychiatric Nursing program, fill out the form and a member of our advisory team will get in touch with your shortly.

This story is beautiful! Best way to wake up on a Saturday morning! Thanks for sharing Debra.

I can relate to so much of you life, past and struggles as a single mother. I am on a personal journey myself and your story has Inspired me, so I thank you for this. I received this email as I am in the works just as you were to get my prerequisite and start the psychiatric Nursing program. I have all the same fears as you did and feel the reach is too far to grasp, however I know this is not true. Just like you I want to show my boys that what feels impossible can be done, I want to set that bar.
I hope I can be a success story like you.

Thanks again and congratulations