Never give up on your passion

Becoming a doctor is an extraordinary achievement. It requires years of rigorous education, practice, and discipline. But Dr. Adriana Garcia sacrificed this title to start over and provide a better future for herself and her family.

Adriana smiles on her Student of the Year gown

Growing up in Venezuela, Adriana had always known she wanted to be a doctor and put her heart and soul into becoming one. She specialized in ophthalmology and after seven years of continuous education, became Dr. Adriana Garcia.

While her husband worked, Adriana stayed busy with her sons. She didn’t know it would take her five years after moving to Vancouver to finally go back to her passion for eye care.

Life was on track and Adriana was dedicated to her work. She practiced ophthalmology for three years before deciding to move to Canada in search of a better quality of life. “It was more for our safety. A couple of years before moving to Canada, my husband was robbed, which ended in an accident. It took a long time for him to recover and that incident compelled us to move to Canada” Adriana shared.

It was a big decision for Adriana and her husband, Carlos, as he had to give up his career as a supervisor at food industry giant. But as fate would have it, Adriana and Carlos packed their bags, said goodbye to their life’s work and flew to Montreal in search of a safer future. Although they had to start from scratch, the Garcias were determined to follow their passions. While Carlos enrolled in a post-graduate degree in finance at McGill University, Adriana began working in an Opthalmologist’s clinic as an Opthalmic Assistant and volunteering at the Canadian National Institute for the Blind.

Adriana looked for career options that took her education and experience as an eye doctor into consideration. After research and advice from her coworkers, Adriana decided on pursuing an optometry program in Ontario. The only hiccup was her international academic credentials, as she would need to take bridging programs to fulfill entrance requirements. Around this time, she and Carlos were expecting twins, so Adriana decided to put her education on the back burner to spend as much time with her babies as possible. 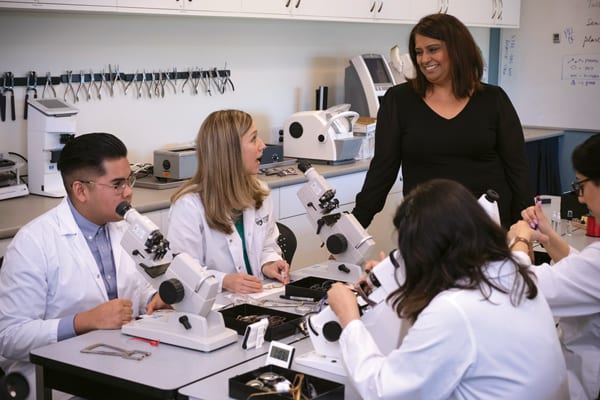 Adriana was happy to share her knowledge with her classmates who in turn helped her with courses she found challenging.

After three years of living in Montreal, it was time for another move. Carlos received a job opportunity in Vancouver at a renowned food and beverages company after finishing his master’s degree. The Garcias moved to Vancouver and again, started from the beginning. While her husband worked, Adriana stayed busy with her sons. She didn’t know it would take her five years after moving to Vancouver to finally go back to her passion for eye care.

“I researched to see which programs were accredited and would let me have time for my kids. Stenberg’s schedule fit right in”

Adriana’s interest in eye care started at a young age when she witnessed the struggles some of her family members had with eye diseases. Helping people in similar situations was her main motive in becoming an Opthalmologist. As her kids grew older, Adriana’s determination to go back to her passion grew stronger. In Vancouver, she had access to more educational programs than in Montreal. After further research, she decided Stenberg’s Optician Diploma program was the perfect fit for her. “I researched to see which programs were accredited and would let me have time for my kids. Stenberg’s schedule fit right in,” Adriana shared.

REIGNITING HER PASSION FOR EYE CARE

Impressed by the short duration and instructors, Adriana enrolled in the full-time, in-class Optician Diploma program while raising two young children. She would wake up at 3 a.m. to study so she could spend time with her kids before leaving for class. She never gave up on her passion.

“As an Ophthalmologist, I dealt more with diseases and prescriptions but the whole process for eyeglasses and contact lens fabrication was completely new to me.” 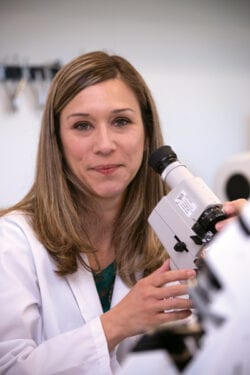 Adriana would wake up at 3 a.m. to study so she could spend time with her kids before leaving for class

In class, Adriana’s classmates and instructors were unaware of her doctoral education and career. After impressing them with her knowledge on the human eye anatomy, someone asked how she knew so much. Adriana revealed she is a doctor and began sharing her knowledge with the class. In return, they helped her in subjects she found challenging, such as computer skills. Adriana also didn’t have any education in business but was excited to learn about it.

“I didn’t know anything about sales and business, and it was a good opportunity for me to learn about it, as I would eventually like to open my own store,” she disclosed. “As an Ophthalmologist, I dealt more with diseases and prescriptions but the whole process for eyeglasses and contact lens fabrication was completely new to me.”

Adriana loved hands-on training during labs and practicum placements. She excelled in the program and graduated with a 94% GPA. She passed the national licensing exam and was hired at as an Optician Technician. Does she miss being a doctor? A little, but she loves being a Licensed Optician and helping others see better ❉.